UP FROM THE DEEP 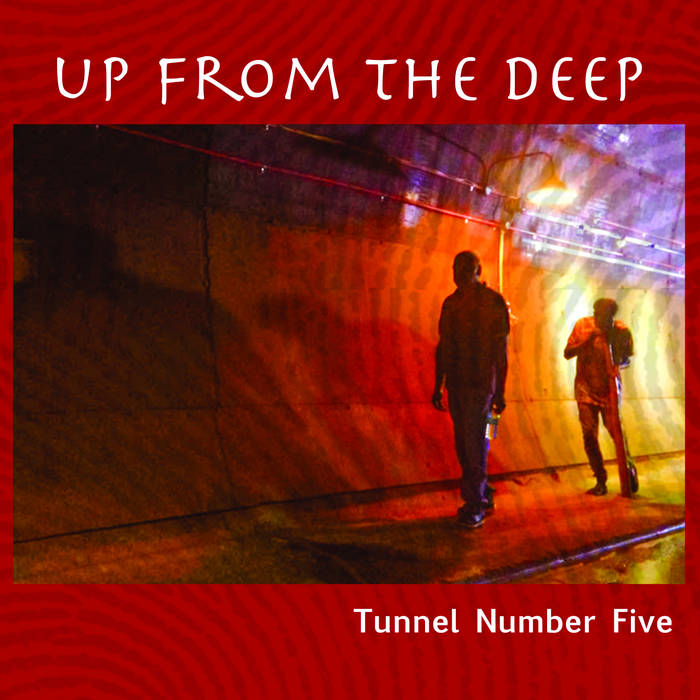 For five nights in August 2016, Tunnel Number Five was filled
with music. This is a selection of collaborations edited to fit
on one CD. Each concert featured a different mix of artists
performing antiphonally along the tunnel. If you have a fancy
home sound system, please turn off all effects and surround
sound functions as these disguise the physicality of the tunnel.
Headphones give a good stereo experience of being in the
172m of resonance with performers and audience.

We recommend listening with earphones to get the full stereophonic effect of the movement of sound down the length of the tunnel. The microphones were facing each end of the 172m tunnel, in different locations on different nights, in the midst of a single line of 70 to 110 audience members as the performers stood or wandered along the tunnel before them. (100 is full house). Recorded by Location Recordist, David Matthews.

Photo: Floating origami candles made by Sachi Hirayama of Darwin Community Arts to decorate the water seepage overflow channels that run the length of our 172m stage. Tunnel Number Five 2016.

TUNNEL NUMBER FIVE: festival of underground music 2016
assisted by the Australian Government through the Australia Council for the Arts, its arts funding and advisory body

Anne is a shakuhachi player performing in a wide range of music. Anne trained in Japan in 3 lineages with Nakamura Shindo, Tajima Tadashi and Yamaguchi Goro. She has played since 1986 (following 14 years of playing silver flute). Some of Anne's albums are available as Compact Disks.
CD orders: absurdpublications.com/products-in-shop/cds/ ... more

Bandcamp Daily  your guide to the world of Bandcamp